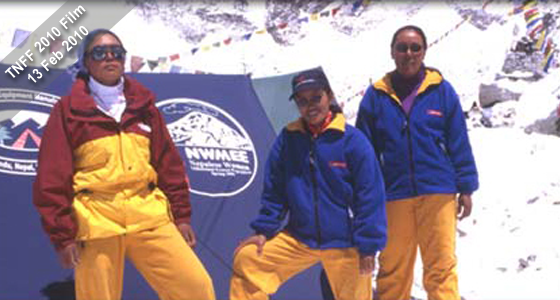 This inspiring award-winning film documents the first ever all-Sherpa women expedition team as they leave behind their usual household chores to climb the legendary Mount Everest.

Ramyata Limbu is a veteran Nepali journalist, and for the last fifteen years worked as a journalist for the Nepali Times, Kantipur Publications and as a freelance journalist for the Inter-Press News Agency. She co-produced and shot the award winning feature independent documentary Daughters Of Everest, which followed the first team of all women, Nepali Sherpa climbers to ascend Everest. She is also the Festival Director of Kathmandu International Mountain Film Festival. Sapana Sakya is the Media Fund Director at the Centre for Asian American Media in California, where she manages CPB funding initiatives and supports independent filmmakers. Sapana’s background is in independent documentary and journalism. She produced and directed Daughters of Everest, an award-wining film about the first Nepali women’s Everest expedition. Her other works include Oklahoma Home, about two Filipino doctors living and working in rural Oklahoma, part of the series Searching for Asian America. She also produced and directed, Red White Blue.