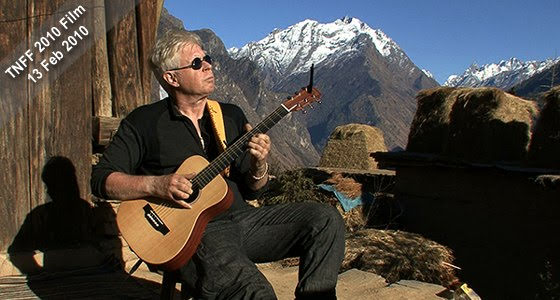 Nepali and English with English Subtitles

This insightful documentary follows musician Bruce Cockburn on his return to Nepal where he finds much has changed during his 20 year absence. Although most of the population still lives in rural villages connected by ancient footpaths, children are going to school and farmers are using new agricultural practices. The film reveals people who have much to offer the world: spiritual wisdom and tactics for survival through determination and interdependence.

Robert Lang is a director, producer, writer and cameraman who, over the past fifteen years has been responsible for production of over 150 television programs. Since he first began as a director/cameraman at the NFB in Montreal in the 1970s, themes of sustainability and biodiversity have been central to his work in documentaries like Potatoes (NFB, 1976), Fragile Harvest (CBC, 1985), Earth Journal with Richard Leakey (NBC-TV, 1991), River of Sand (TVO/Vision TV, 1998) and The Sacred Balance with David Suzuki (CBC/PBS, 2002).