The Sound of One Leg Dancing 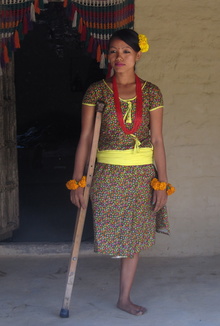 This film is about Mina, who lost one of her legs at a young age in a domestic accident. Mina comes from a meager farming family in the western Nepal. Despite her disability, she is an exceptionally gifted dancer. The film follows her as she goes to compete in a dance competition. She enters the final stages of the competition in Kathmandu after excelling in the regional competition. Filled with beautiful dance choreography and Nepali folk music, this film is about Mina dancing her dreams to the fullest.

Dilman Dila is a Ugandan writer, filmmaker, and a social activist. He started his film career with What Happened in Room 13 (2007). The Young Ones Who Won’t Stay Behind (2008) was in collaboration with filmmaker Mira Nair. He lived in Nepal for two years, during which he made several documentaries including Untouchable Love (2011) and The Sound of One Leg Dancing (2011), for which he won the Jury Award at the Nepal International Indigenous Film Festival in 2012. His first narrative feature is The Felistas Fable (2013).